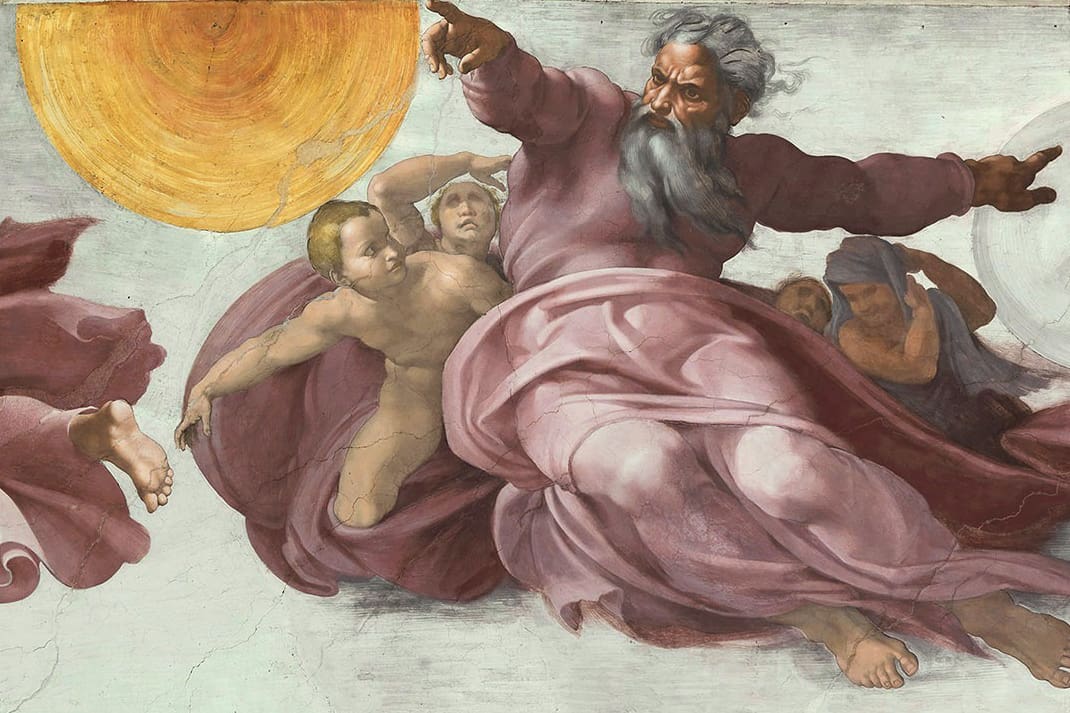 Resolve to be Better Looking this Lent

An architect, a surgeon, and a liturgist were sharing a round of beers at a bar one day, wondering among themselves what occupation best described God. So, since the liturgist happened to have a copy of Holy Writ on him, the three friends opened the Bible to the Book of Genesis and took turns reading the creation accounts. After they had finished, the architect was the first to speak. “To me,” he said, “God seems most like an architect. Observe that from chaos and nothingness he drew forth, organized, and built the entire universe: the seas, the mountains, the rivers, and land, all according to a well-designed plan. Clearly, God is an architect.” This description of God made some sense to the others.

Still, the surgeon couldn’t help but observe that God was, in his mind, more like himself. “I agree that in the beginning there was chaos and nothingness. But what is more remarkable than designing and ordering the material world is how he brought forth life itself. Consider how Adam lay sleeping, and then, from his opened side—as by the hand of a most-skilled surgeon—God brought forth Eve. Only a surgeon could do such a thing.” Our friend the surgeon, the architect and the liturgist agreed, had a point.

But all of a sudden, the liturgist exclaimed: “Aha! But God is first and foremost a liturgist! After all, who made the chaos in the first place?”

Chaos: the word means disorder and confusion. Its opposite is order and arrangement, the Greek (and now English) word for which is cosmos—the root of “cosmetics.” Thus, when God made the heavens and the earth—that is, the cosmos—he arranged, ordered, and enlivened his ex nihilo creation. Out of chaos, emerged cosmos.

But it wasn’t long before the cosmos fell back into chaos once again (and not necessarily because of the liturgists!). At first, there was harmony and concord between God and man, heaven and earth. With Adam’s rejection of God’s goodness, the once well-ordered cosmos fell apart. And as creation fell apart, so did Adam’s perfect union with Eve. For once Adam rejected God, it was no surprise that Adam also rejected his wife: “This woman whom you put here with me—she gave me fruit from the tree, so I ate it,” says Adam to God (Genesis 3:12). His warring with God led his body to war against his own mind, so that, as St. Paul would say many years later, “I do not do the good I want, but I do the evil I do not want” (Romans 7:19). Our first father’s sinful enslavement of the cosmos led the fallen cosmos to enslave him: “Thorns and thistles [the ground] shall bear for you…. By the sweat of your brow you shall eat bread, until you return to the ground, from which you were taken; for you are dust, and to dust you shall return” (Genesis 3:18-19). Cosmos had returned to chaos.

Following the fall, then, we returned to ground zero. Still, God willed once again to add some logic, order, and beauty into this otherwise chaotic, disordered, and ugly creation. He sent his Son, the Logos.

Jesus, the Second Adam, reverses the catastrophic collapse caused by the first Adam. Whereas the first Adam exclaimed, “Not thy will, but mine, be done,” and turned cosmos to chaos, the Second Adam cries out, “Not my will, but thine, be done” (Luke 22:42), and he turned chaos to cosmos once again. In taking on our ugliness—“so marred were his features, beyond that of mortals his appearance, beyond that of human beings” (Isaiah 52:14, as we read on Good Friday)—Jesus bestows upon us his divine beauty.

God made the cosmos, and man made the ensuing chaos. But Jesus—who is God and man—restored the cosmos from chaos once again. And here is where you and I and the ugliness in our lives come into the picture: for the liturgy—especially the Triduum liturgies—is the cosmetic enhancement of our fallen world.

The morning’s first reflection in the mirror is rarely the best we show throughout the day. Hair is a mess. Eyes are drooping and puffy. An otherwise excellent handlebar moustache has been wrenched wildly awry. What’s our solution? Cosmetics! Just as that first cosmos was ordered and arranged, so now our morning medicine cabinet’s worth of products re-order and re-arrange our fallen and ugly selves.

The liturgy is similarly cosmetic. Liturgist Aidan Kavanaugh was fond of saying that “liturgy does the world the way the world was meant to be done,” for it carries on the beautifying work of Christ, applying the restorative unction of his Holy Spirit. And for those of us who participate in the liturgy—especially the Easter liturgies—God’s cosmetic work on us re-creates, re-makes, and re-stores us to that living reflection of the Logos, who is Beauty himself.

So, this Lent, resolve to become more beautiful. Celebrate the liturgy beautifully, and open your ears, eyes, minds, and hearts wide. Show those liturgists out there a thing or two—and turn chaos into cosmos. We may compare God to many things, but as the liturgy shows us, there is no comparison to what God truly is: beautiful.