A: Eucharistic Prayers II, III, and IV were written in the 20th century for the Roman Missal of 1969 based on traditional models. They were each written as a single narrative with a beginning, a middle, and an end. Eucharistic Prayer I has a different origin and a different structure. This is reflected in the repeated occurrence of the phrase “Through Christ our Lord. Amen.” throughout the prayer. Four of these occurrences became optional in 1969. The fifth and final occurrence is still required because it leads directly to the conclusion of the prayer itself: “…but granting us your pardon, through Christ our Lord. Through whom you continue….”

Eucharistic Prayer I, the Roman Canon, appears to have been assembled from a number of independent prayers which were brought together over time. Some of the earliest units in Eucharistic Prayer I go back at least to the fourth century, if not earlier. Other parts were added to the original form of the prayer. For example, the Sanctus seems to have been added to the prayer by the middle of the fifth century. The sections which begin “In communion…” and “To us, also, your servants…” were probably added during the time of Pope Gelasius at the end of the fifth century. It also appears that the sections which commemorate the living and the dead, both of which begin “Remember Lord your servants…,” were used occasionally as special inserts whenever the circumstances warranted their use. Over time, they begin to be used during all celebrations of Mass. These additional sections to the Eucharistic Prayer ended with “Through Christ our Lord,” as all prayers normally do. These words testify to the Church’s faith that all prayer addressed to God the Father is offered through the ministry of Christ the High Priest. In the Middle Ages, due largely to the force of habit, the custom arose of the priest celebrant spontaneously (it seems) adding “Amen” to each of the phrases, “Through Christ our Lord.” The word “Amen” at these various points eventually became a formal part of the Roman Canon.

Until 1967, the Roman Canon was said in a low voice by the priest and was not heard at all by the faithful. Once this Eucharistic Prayer began to be heard by all those present, it was thought that the repetition “Through Christ our Lord. Amen.” broke up the narrative unity of the prayer. It was argued that these endings made the Roman Canon sound like a collection of five unrelated prayers rather than one single prayer of praise and intercession. That is why the decision was taken to make four of the five occurrences of “Through Christ our Lord. Amen” optional (which is why the words appear in parentheses). Whenever a celebrant exercises the option to include that phrase when praying the Roman Canon, the entire phrase is recited out loud by the celebrant alone, including the word “Amen.” The faithful offer their “Amen” at the very conclusion of the Eucharistic prayer, in response to the doxology, “Through him, and with him, and in him….”

Diocese of Portland, ME 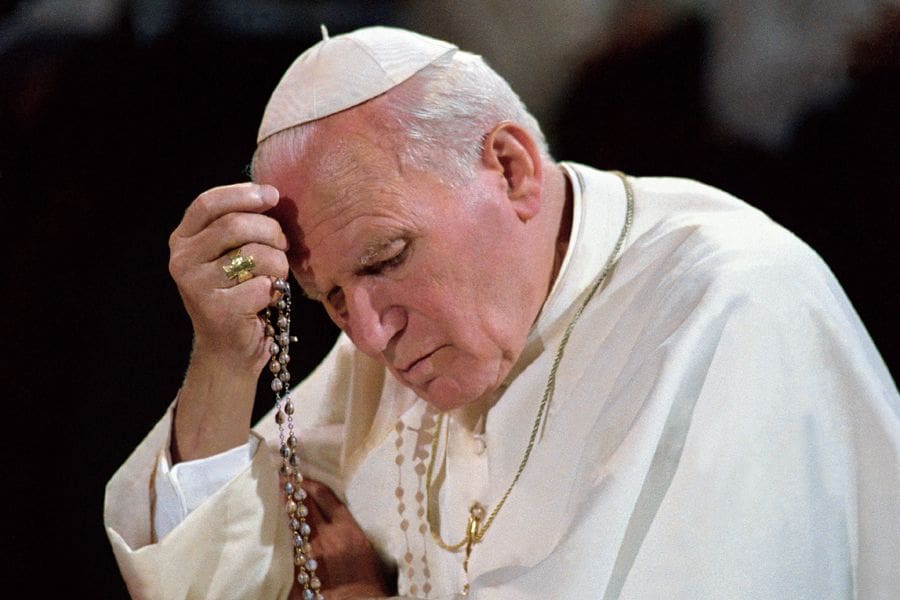