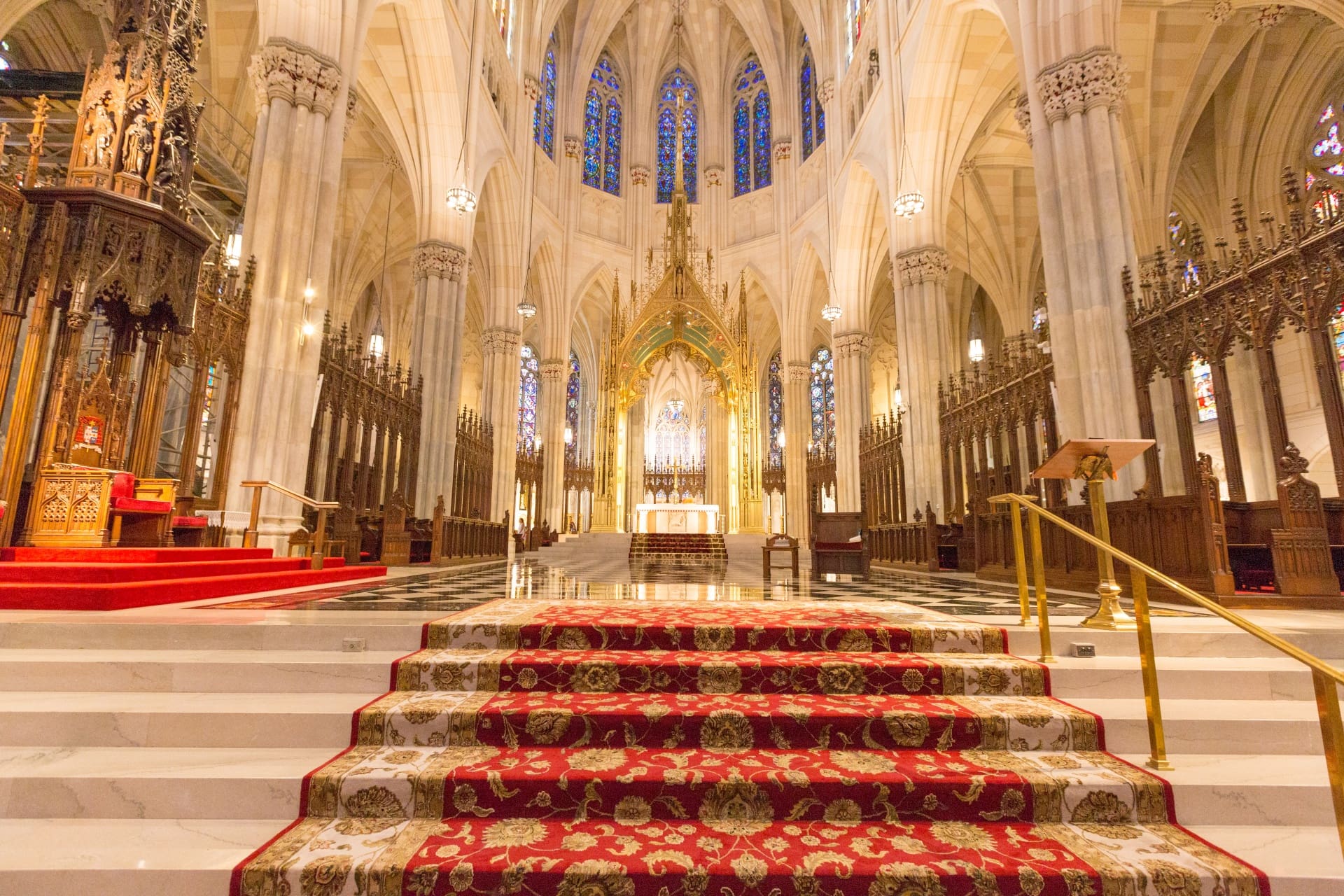 When we go back to the beginnings of the Church, the first Christians used two Greek words to describe their Eucharistic table: thusiasterion, meaning “altar,” and trapeza meaning “table.” The words thus express the twofold meaning of the Mass—a holy sacrifice and a sacred banquet.

When St. Paul speaks of the “table of the Lord” in 1 Corinthians 10:21, he refers more to the Eucharist than to the place where it is celebrated. But the words “we have an altar” in Hebrews 13:10 may well be the earliest reference to a distinctive Christian Eucharistic altar.

In post-Apostolic times early in the second century, St. Ignatius of Antioch used the Greek word for “altar,” thusiasterion, referring to the celebration of the Eucharist by the bishop and the place where the holy sacrifice is offered. This word is derived from the Greek version of the Old Testament, the Septuagint, to describe stone altars where the Hebrew people offered their sacrifices.

The Latin Fathers used standard Latin words for an altar, ara (an altar set on a “high place”) and altare, to refer to the Eucharist itself and the holy table of the Christian sacrifice. In North Africa, Tertullian used ara, but St. Cyprian took this word to refer to a pagan altar. He preferred altare for the Eucharistic table, and through our Roman Rite this is the Latin origin of the English word “altar.”

The Christian altar was always treated with great reverence. The Greek Fathers described the “holy table” as “mystical,” “tremendous,” and “priestly.” It was regarded as so holy that nothing was allowed to be placed on it except the sacred vessels, a noble chalice and paten, and the Book of the Gospels.

As already noted, the first Christian altars in the centuries of persecution were mainly wooden. By the fourth century, when Christianity had become legal and many new churches were being built, altars were often constructed of stone, marble, or alabaster. This became the more widespread tradition. In Ravenna, a mosaic of the priest Melchizedek depicts the altar of this age of the Church Fathers, a large cube-shaped table, freestanding and dressed in rich hangings and embroidered cloths.

The altar was often enshrined under a canopy resting on four columns—the ciborium or baldachino—that we still see in the great Roman basilicas such as St. Peter’s, St. John Lateran, St. Paul’s Outside the Walls, St. Mary Major, etc. In the United States, notable examples are found in the Shrine of the Immaculate Conception in Washington, DC, St. Patrick’s Cathedral in New York City, and Sacred Heart Cathedral in Newark, NJ. Candles stood around the altar and a jewelled cross and oil lamps were suspended by chains above it. In early churches, too, silken curtains were hung from this canopy and these veils were drawn around the altar to conceal the most sacred moments of the Mass, the consecration of the bread and wine.

The altar was always located in an area set apart from the rest of the church, the “sanctuary” or holy place, derived from the great Temple in Jerusalem. A low screen separated the sanctuary from the rest of the church. In the East, this screen displayed holy images and icons, and gradually it developed into the solid screen that now conceals the altar in the Byzantine Rite of the Greeks, Ukrainians, Russians, Melchites, etc., whether in Catholic or Orthodox churches. This screen is called the ikonostasis. Concealing the altar in a sacred place and a holy action at the altar emphasizes the mystery, the supernatural action, and event. By concealing something sacred, you reveal it as a mystery.

The altar and sanctuary in the Christian East symbolize the heavenly altar in the Letter to the Hebrews. Therefore, the way Eastern Christians celebrate their beautiful liturgies reflects the offering of Jesus Christ our great High Priest and the eternal worship offered to God by saints and angels in heaven. Christians on the earthly pilgrimage are raised into the heavenly dimension when they are gathered by God to celebrate the holy liturgy.

In the West, where the simpler Roman Rite prevailed, the custom of concealing the altar steadily faded. In the Medieval era the altar was moved closer to the back wall of the sanctuary. Gradually it lost its cubic form, becoming longer. Behind it rose a reredos adorned with paintings, carvings, or sculpture. A cross, candles, and relics began to be placed directly on the altar in the early Middle Ages. Moreover, the number of altars multiplied in a single church, influenced by the many “side altars” or chapels needed in a monastic church for Masses celebrated by monks.

With some exceptions, the tabernacle for reserving the Eucharist was not set on an altar in Western Europe until the 16th century. Before that time, the tabernacle took various forms: a Eucharistic tower, a vessel suspended over the altar (often shaped like a dove) and known as a hanging pyx, or a noble safe-like container set in a wall (ambry). Placing flowers on the altar or on shelves behind it seems to date only from the 18th century and is still frowned upon by liturgists.

The celebrant at the Christian altar faced East from the earliest times. This custom was symbolic of God’s People looking towards the rising sun, a sign of the coming of the risen Christ with his light of grace, hope, and salvation. To face East usually meant that the priest and people all faced the same way, so the priest was leading the people as someone leading a procession. But if the sanctuary happened to be at the Western end of the church, then the priest faced the people as in St. Peter’s Basilica, Rome. This was also necessary if the tomb of a saint was set directly under and in front of the altar, which is the plan of St. Peter’s.

It has been argued that linking an altar to the tomb of a saint went back to when Mass was celebrated over the tombs of martyrs in the catacombs, but that is not so certain. We still maintain this link by inserting the relics of saints under a new altar during the rite of dedication.

Some scholars in the liturgical movement of the last century claimed that the Eucharist was originally celebrated facing the people. That is strongly contested today. However, to promote better participation in worship, Mass facing the people was revived before the Second World War in some parishes, monasteries, and student chaplaincies in France and Germany. Mass facing the people became the favored option in the liturgy after the Second Vatican Council. It was hoped that this arrangement would promote “full and active participation,” especially now that the language of the people was used for worship.

Mass facing the people has had a radical effect on altars and sanctuaries. In many churches, the existing altar was brought forward or a new freestanding altar was constructed in front of it. The new altars took a simpler form, with reduced proportions because a cumbersome altar might dwarf the priest standing behind it. In some churches the ancient cube-shaped altar reappeared. While this may be suitable in a chapel, it makes the altar look insignificant in a large church.

Once the altar was moved forward, the tabernacle had to be relocated, so there was a return to earlier methods of Eucharistic reservation, that is, setting the tabernacle into the wall or in a tower or shrine apart from the altar, but usually located in the sanctuary. According to a second option, the tabernacle may be located on a side altar or in a separate Eucharistic chapel, visible from the body of the church (see the revised General Instruction of the Roman Missal (GIRM), nos. 314-317).

Pope Emeritus Benedict XVI is an expert liturgist. By example, and in line with what he wrote as a cardinal, he promoted what is called “the Benedictine altar arrangement.” This has been maintained to a degree by Pope Francis. The crucifix is set on the altar, at the center with candles arranged symmetrically on each side. When the celebrant faces the people, the crucifix need not block the people’s view, because they usually look at the altar from an angle. The intention is to emphasize that Jesus Christ is the center of the celebration, not the priest. Because of this arrangement, any altar can now “look like an altar,” not just a table adorned with some candles and flowers.

Unfortunately, we have not always maintained the deep sense of reverence for the altar as the Christians of the first centuries had. They expressed their Eucharistic devotion in the care they took to build beautiful and valuable altars. Some of our churches contain altars that seem temporary, even cheap. Yet in the post-conciliar liturgy, the Church calls us to set up and maintain noble and permanent altars. The guidelines are set out in the revised GIRM, nos. 296-308 and the Order for the Dedication of a Church and Altar.

Bishop Elliot will consider the ecumenical dimensions of the altar in the next installment, while part I examined the definition of the Christian altar.

Most Rev. Peter J. Elliott is Auxiliary Bishop Emeritus of Melbourne, Australia, and holds degrees in history (Melbourne), theology (Oxford), and a doctorate in sacramental theology, Lateran University, Rome. Because of his Anglican background, he was the delegate of the Congregation for the Doctrine of the Faith and the Australian Bishops’ Conference for establishing an Australian Ordinariate for former Anglicans. Having been a Consulter to the Congregation for Divine Worship, he was a Member of the interdicasterial commission “Anglicanae Traditiones,” preparing liturgical texts for the Ordinariates. He was a member of the Australian Bishops’ Liturgy Commission and the Australian National Liturgical Council. Bishop Elliott is the author of Ceremonies of the Modern Roman Rite (Ignatius Press, 1995, 2005), Ceremonies of the Liturgical Year (Ignatius Press, 2002), and Ceremonies Explained for Servers (Ignatius Press, 2019).