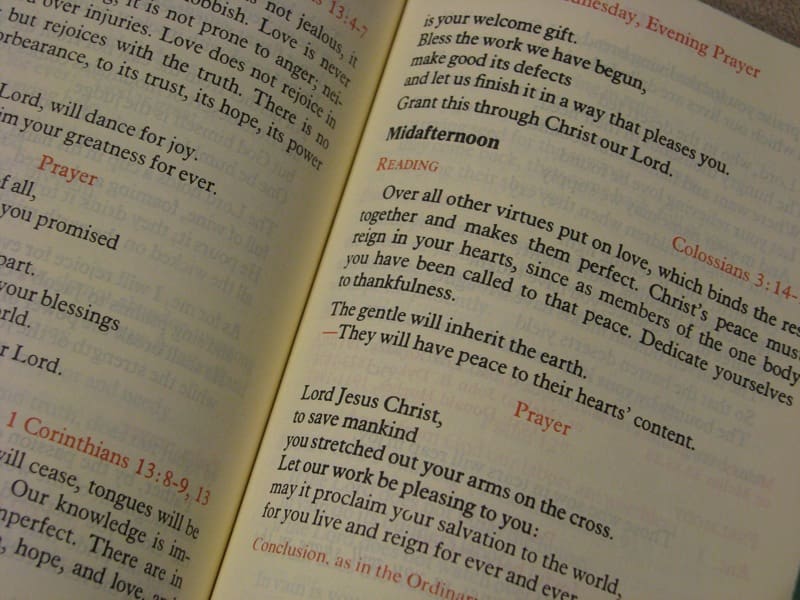 Q: What is the clergy’s obligation to pray the Liturgy of the Hours?

The Second Vatican Council desired “that the chief hours, especially Vespers, are celebrated in common in church on Sundays and the more solemn feasts. And the laity, too, are encouraged to recite the divine office, either with the priests, or among themselves, or even individually” (Sacrosanctum Concilium (SC), 100). Although this hope of the Council Fathers has gone largely unfulfilled, it would constitute one excellent way that clerics can pray the Liturgy of the Hours—with the People of God. They can also do so in a spiritual sense by prayerfully uniting themselves to all who pray the Liturgy of the Hours.

The Liturgy of the Hours is part of the daily prayer of clergy and religious, the purpose of which “includes the sanctification of the day and of the whole range of human activity” (General Instruction of the Liturgy of the Hours (GILH), 11). It consists of hymns, psalms, readings, and prayers and is broken up into the Office of Readings, Morning Prayer, Daytime Prayer (which may be prayed at midmorning, midday, or midafternoon), Evening Prayer, and Night Prayer. In so far as possible, “it is preferrable that they should be recited at the hour nearest to the one indicated by each canonical Hour” (SC, 94; GILH, 11; canon 1175).

The Code of Canon Law specifies the obligation of clerics to pray to the Liturgy of the Hours, noting that they are to do so “according to the proper and approved liturgical books” and that permanent deacons “are to carry out the same to the extent defined by the conference of bishops” (canon 276, §2, 3º). In its June meeting of 2003, the United States Conference of Catholic Bishop defined that permanent deacons in US dioceses are to pray Morning and Evening Prayer daily and that, when possible, they should do so with the community to which they have been assigned (cf. National Directory for the Formation, Ministry and Life of Permanent Deacons in the United States, United States Conference of Catholic Bishops, 2009, art. 90).

Transitional deacons, priests, and bishops “should recite the full sequence of Hours each day, as far as possible at the appropriate times,” which would mean that—at least ideally—the book would be opened and prayed five separate times each day, although it is possible to pray the hours together if they cannot be prayed at the appropriate times becomes of travel or meetings, etc. (GILH, 29).

The General Instruction of the Liturgy of the Hours recognizes that the hours of Morning and Evening Prayer are the “hinges…which should not be omitted except for a serious reason” (29). What such a serious reason may be is not specified by law and is left to the discretion of the cleric. Such a serious reason might include extensive travel in the course of a single day. It is also possible for the Ordinary to dispense from the obligation to pray the Liturgy of the Hours, either in part or in full, if a situation so warrants it. After Morning and Evening Prayer, clerics “should faithfully recite the Office of Readings” and “will have also at heart the recitation of the Daytime Hour and Night Prayer” (GILH, 29).

If clerics live together in common, they “should arrange to say at least some part of the Liturgy of the Hours in common, particularly Morning and Evening Prayer” (GILH, 25).