1. The Order of the Dedication of a Church and an Altar (ODCA) belongs properly to:

2. Which of the following rites was added to the ODCA upon its revision following the Second Vatican Council?

3. True or False: Mass can be celebrated on an altar even before it is dedicated or blessed.

4. During the celebration of “The Order of the Dedication of a Church,” the first reading must always come from:

5. At the celebration of “The Order of Laying a Foundation Stone or the Commencement of Work on the Building of a Church,” what distinguishing feature marks the site?

6. True or False: the ODCA sees the parish pastor of the new church or altar as the normative minister of the rite.

7. Which of the following ODCA rubrics guides the use of relics in altars?

a. Relics must be those of martyrs; relics of non-martyr saints are not allowed.
b. Relics must be of such a size as to be recognizable as parts of human bodies.
c. Relics must be inset into an altar stone, which is itself placed within the top of the altar.
d. Relics may only be obtained from the Holy See’s Congregation for the Causes of Saints so that the relics’ authenticity may be guaranteed.

8. True or False: In order to highlight the dignity of the baptized faithful, the current ODCA envisions that the walls of the nave be anointed with sacred chrism, the same oil used following the baptism of infants and adults.

9. Chapter III of the ODCA, “The Order of the Dedication of a Church in Which Sacred Celebrations Are Already Regularly Taking Place,” may only be used if:

10. Which of the following rites for the dedication of an altar is most significant:

a. Depositing of relics.
b. Anointing the table (mensa) of the altar.
c. Prayer of dedication.
d. Celebration of the Eucharist upon the altar.
e. Completing canonical documents.

2. d. Rite of blessing a church building already in use. According to Annibale Bugnini’s The Reform of the Liturgy, 1948-1975, “Many cases were adduced in which a church was dedicated only after a period (sometimes of years) during which it had already been in use out of necessity or for some other reason, or in which old churches were inaugurated again after a complete restoration. It was asked that some suitable celebration be provided for these occasions. The study group therefore prepared a ‘rite for the dedication of a church already in general use for sacred celebrations’” (p.794). The contents of the current Order of the Dedication of a Church and an Altar include:

Apart from the addition of the above-named order for dedicating a church already in use, some chapters of the preconciliar Pontifical were omitted from the postconciliar edition and, in some cases, published elsewhere, including the “inauguration of a place intended for liturgical celebrations and other uses,” the “blessing of a new cross to be displayed for the veneration of the faithful,” the “blessing of a bell,” the “blessing of a cemetery,” the “public supplication when a church has been the place of a serious offence,” and the “crowning of a statue of the Blessed Virgin Mary” (see Bugnini, 793-4).

3. False. “Since, in fact, an altar becomes sacred principally by the celebration of the Eucharist, in order to respect this truth, care should be taken that Mass is not celebrated on a new altar before it has been dedicated, so that the Mass of the Dedication may also be the first Eucharist celebrated on the altar itself” (“The Order of the Dedication of an Altar,” 13).

4. d. Nehemiah 8:1-10. “In the Liturgy of the Word,” the ODCA states, “three readings chosen from those in the Lectionary for Mass (no. 816) for the Rite of the Dedication of a Church are proclaimed. The First Reading is always, even during Easter Time, the passage of Nehemiah which recounts the gathering of the people of Jerusalem in the presence of Ezra the scribe to hear the proclamation of the Law of God (Nehemiah 8:1-4a, 5-6, 8-10)” (“The Order of the Dedication of a Church,” 12). Liturgical scholar A.G. Martimort explains that the passage exemplifies to a degree the structure of Old Testament liturgical gatherings, where the people are called together to hear God’s word and respond to it in prayer and praise before offering sacrifice. The passage also signifies the importance of the word of God in Judaism and, now, Christianity. Martimort writes, “[A]fter the return from the Exile there was the eight-day-long assembly that signaled the beginning of Judaism (Neh 8–9). The convocation was no longer a direct act of God but was done in his name; his presence was nonetheless ensured through signs: the cloud, the ark, the temple, or even simply the book we call the Bible. The reading of the book became an increasingly solemn event, for it was truly God who spoke in it” (The Church at Prayer, Volume I: Principles of the Liturgy, 92-92).

5 c. A cross is placed where the future altar will be built. As described in the Introduction to the rite of blessing, “In the place where the altar will be located, a wooden cross of appropriate height is placed” (“The Order of Laying a Foundation Stone or the Commencement of Work on the Building of a Church,” 6). Additionally, “Insofar as possible, the construction site of the church should be well marked out, and it should be possible to walk around it conveniently” (5).

6. False. “It is the responsibility of the Bishop, who has been entrusted with the care of a particular Church, to dedicate to God new churches built in his diocese. If, however, he cannot himself preside at the rite, he is to entrust the office to another Bishop, especially to one who is his associate and assistant in the pastoral care of the faithful for whom the new church has been built; or, in altogether special circumstances, to a Priest, to whom he is to give a special mandate” (“The Order of the Dedication of a Church,” 6; “The Order of the Dedication of an Altar” contains a nearly identical rubric at number 12). There is a parallel between the initiation of a person and the inauguration of a church or an altar: each is sprinkled with water, anointed with sacred chrism, and “receive[s] the Body of Christ” (“The Order of the Dedication of an Altar,” 23) in their respective transformations from earthly beings to images of Christ. The minister for Christian initiation and the dedication of churches and altars is also the same: the bishop.

7. b. Relics must be of such a size as to be recognizable as parts of human bodies. The current norms for the use and placement of relics are as follows: “The tradition of the Roman Liturgy of placing relics of Martyrs or of other Saints under the altar is fittingly to be retained. Nevertheless, the following should be noted:

a) Relics for deposition should be of such a size that they can be recognized as parts of human bodies. Hence, enclosing excessively small relics of one or several Saints is to be avoided.

b) The greatest care must be taken to determine whether relics intended for deposition are authentic. It is better for an altar to be dedicated without relics than to have relics of doubtful authenticity deposited under it.

8. False. While the ODCA does call for the anointing of the walls of the church building, its motivation for the instruction is not directly connected with the baptismal dignity of the faithful. Rather, “the anointing of the church signifies that it is given over entirely and perpetually to Christian worship. Twelve anointings are made in accordance with liturgical tradition, or, as circumstances suggest, four, signifying that the church is an image of the holy city of Jerusalem.” In addition to the anointings, crosses are also placed upon the walls: “It is praiseworthy to keep the ancient custom of placing crosses made of stone, bronze or other suitable material or of carving them in the very walls of the church. Thus twelve or four crosses should be provided according to the number of anointings (cf. above) and suitably distributed on the walls of the church at a convenient height. A small bracket should be fitted under each cross into which is fixed a small candlestick with a candle to be lighted” (“The Order of the Dedication of a Church,” 16, 22).

9. c. The altar of the church building is new and has not yet been dedicated. Not just any church that has had a large or small restoration is a suitable candidate for a dedication after it has begun to be used. The Introduction to the chapter explains that “in churches such as these a distinction is made for good reason between those that have been built recently, in which case the motive for the dedication is clearer, and those that have been standing for a long time; for the latter to be dedicated it is necessary: a) that the altar has not yet been dedicated, since it is rightly forbidden both by custom and by liturgical law to dedicate a church without dedicating the altar, for the dedication of the altar is a principal part of the whole rite; b) that there is something new or greatly changed with respect to the building (for example, the church has been completely restored) or to its juridical status (for example, the church has been raised to the rank of a parish church)” (1).

10. d. Celebration of the Eucharist upon the altar. “The Order of the Dedication of an Altar” explains that the “celebration of the Eucharist is the most important rite, and the only necessary one, for the dedication of an altar. Nevertheless, in accordance with the common tradition of the Church, both East and West, a special Prayer of Dedication is also said, by which the intention of dedicating the altar to the Lord for all time is signified and his blessing is implored” (21). Liturgical scholar Father Louis Bouyer explains the origins of the Eucharist, the anointings, and the depositing of relics. There were three ways, he writes, “which were used in the ancient Church for the consecration of an altar or a church, all three of which are now contained in the Dedication ceremony of the Pontificale Romanum. The Roman tradition held, in a very theological way, that a place became consecrated for the Eucharistic celebration simply by the first celebration that was held there. The Gallican tradition added various washings and anointings symbolic of a kind of baptism of space and time to make it fit for the Eucharistic celebration; but in the African tradition, the dedication of an altar or a church required that the relics of martyrs be brought to it. A place was understood to be consecrated for the Eucharistic celebration by reason of the fact that in that place the Eucharist had, so to say, achieved its final purpose, as witnessed by the holy relics” (Liturgical Piety, 220).

Readers’ Quiz: On the Seasons of Advent and Christmas 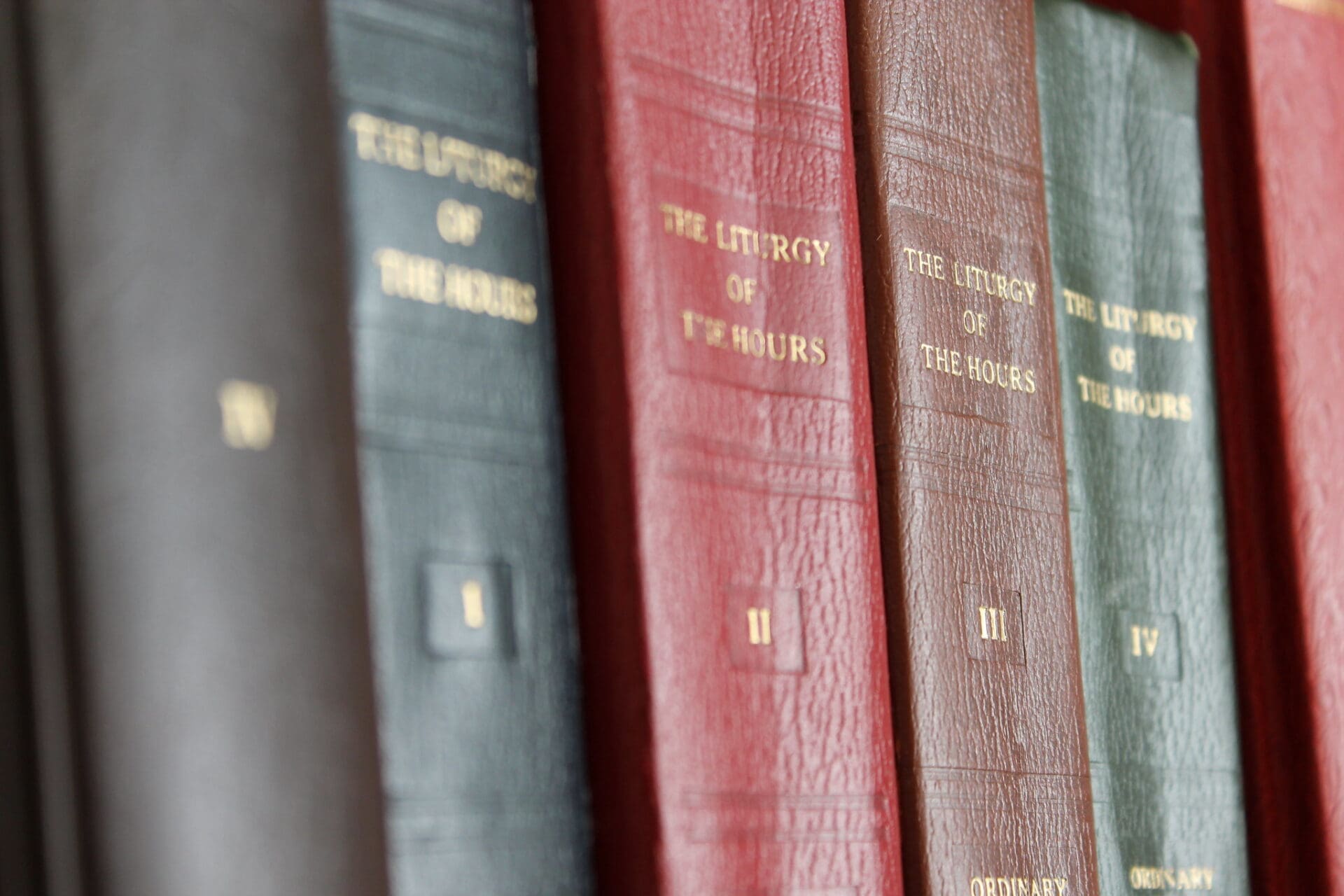