Readers’ Quiz – On Liturgical Ministers in the Roman Missal

Editor’s note: There’s a joke about liturgists that asks, “How many persons does a liturgist believe are in the Trinity,” the answer to which is, “He doesn’t care, as long as they are standing in the right place when Mass starts.” Not wishing to give credence to such an impression, it is nevertheless worth a liturgist’s time—as well as the time of those who serve or pray at the liturgy—to review just what is to be done by whom when the liturgy starts. To that end, test your knowledge on what today’s Roman Missal, now in its 50th year of use, asks of the liturgy’s ministers.

On Liturgical Ministers in the Roman Missal

1.     Which of the following is not listed as a liturgical role by the Roman Missal?

b.     Extraordinary minister of Holy Communion.

2.     The most efficacious ministry by which a layperson may participate in the Mass is:

3.     True or False: Cassock and surplice may be worn by servers.

a.     After the entrance procession has begun.

b.     After the Sign of the Cross and greeting.

c.     After the Liturgy of the Word has begun.

d.     After the offertory at the beginning of the Liturgy of the Eucharist.

5.     True or False: The cantor can sing the tropes in the third form of the Penitential Act (e.g., “You were sent to heal the contrite of heart: Lord, have mercy.”).

6.     Which liturgical minister wears a dalmatic?

7.     Which of the following are roles of the lector?

a.     Proclaims the readings prior to the Gospel.

b.     Directs the singing and participation of the faithful.

c.     Announces the intentions at the Universal Prayer (General Intercessions).

e.     Carries the Book of the Gospels in the entrance procession in the absence of a deacon.

f.      Instructs the faithful on the worthy reception of the sacraments.

8.     True or False: A liturgical minister must be a member of the Catholic Church.

9.     The General Instruction of the Roman Missal (GIRM) envisions the priest celebrant presiding with:

10.  What basic characteristics ought a candidate for liturgical ministry possess?

1.     d. Catechist. All other ministries or ministerial functions, and more, are listed in the General Instruction of the Roman Missal, numbers 98-106.</a>

2.     e. None of the above. The faithful are called to participate actively in the celebration of the Mass in a variety of ways, and chief among them is by offering Christ, the “unblemished sacrificial Victim,” and “also their very selves, and so day by day to be brought, through the mediation of Christ, into unity with God and with each other, so that God may at last be all in all” (GIRM, 79). Every liturgical ministry is meant to foster communion with God—whether through hearing the Word (with the aid of a lector), chanting the Mass’s dialogues (choir and cantor), or receiving communion (acolyte or extraordinary minister of Holy Communion). And while these roles may be for the one who carries them out a means to communion, the specific details of the ministry’s execution may, by the nature of such service, require the minister’s attention to focus on the means of encounter rather than the end of the encounter, union with Christ.

3.     True. The GIRM directs, “In the Dioceses of the United States of America, acolytes, altar servers, readers, and other lay ministers may wear the alb or other appropriate and dignified clothing” (339). Accordingly, a cassock and surplice may be worn under the rubric of “other appropriate and dignified clothing.” The cassock, however, is historically a garment worn by the clergy, or at least those in formation for the clerical state, and for this reason should not be worn by girls or women who serve at the altar, as the alb—which is common to each of the baptized—might.

5.     True. “The Priest, or a Deacon or another minister, then says the following or other invocations with Kyrie, eleison (Lord, have mercy)” (Order of Mass, 6; italics added).

6.     b and d. “The vestment proper to the Deacon is the dalmatic, worn over the alb and stole; however, the dalmatic may be omitted out of necessity or on account of a lesser degree of solemnity” (GIRM, 338). The bishop (including the Pope) may also wear a dalmatic at Mass. The GIRM directs, “At a Mass celebrated by the Bishop or at which he presides without celebrating the Eucharist, the norms found in the Caeremoniale Episcoporum (Ceremonial of Bishops) should be observed” (112). The Ceremonial of Bishops says “The vestments worn by the bishop at a liturgical celebration are the same as those worn by presbyters; but, in accordance with traditional usage, it is fitting that at a solemn celebration he wear under the chasuble a dalmatic (which may always be white). This applies particularly to the celebration of ordinations, the blessing of an abbot or abbess, and the dedication of a church and an altar” (56).

7.     Each option is appropriate for the reader. The current legislation envisions two varieties of reader: the instituted reader is the normative minister who proclaims the word, and, in his absence, a non-instituted reader assumes many of the same roles. An instituted reader, along with the instituted acolyte, are permanent ministries, exercised by males only, and practically (but not exclusively) reserved for men in formation in holy orders. These instituted ministries, formerly called “minor orders,” have existed for centuries in the Church, and the most recent legislation about them was offered by Pope Paul VI in his 1972 motu proprio Ministeria Quaedam. The roles of the reader at Mass—instituted or not—are introduced by the GIRM: “The lector is instituted to proclaim the readings from Sacred Scripture, with the exception of the Gospel. He may also announce the intentions for the Universal Prayer and, in the absence of a psalmist, recite the Psalm between the readings” (99; see also 194-198). In addition, according to Ministeria Quaedam, the instituted reader “is to direct the singing and the participation by the faithful; he is to instruct the faithful for the worthy reception of the sacraments. He may also, insofar as may be necessary, take care of preparing other faithful who are appointed on a temporary basis to read the Scriptures in liturgical celebrations.”

8.     Mostly true: On the reading of sacred scripture, for example, the Vatican’s Directory for the Application of Principles and Norms on Ecumenism states, “The reading of Scripture during a Eucharistic celebration in the Catholic Church is to be done by members of that Church. On exceptional occasions and for a just cause, the Bishop of the diocese may permit a member of another Church or ecclesial Community to take on the task of reader” (133). Similarly, the Directory also states, “Upon request of the couple, the local Ordinary may permit the Catholic priest to invite the minister of the party of the other Church or ecclesial Community to participate in the celebration of the marriage, to read from the Scriptures, give a brief exhortation and bless the couple” (158). These exceptions aside, the Catholic liturgy is served by Catholic ministers and faithful.

9.     b. dignity and humility. The GIRM describes the priest’s ministry at the Mass in these words: “A Priest, who possesses within the Church the sacred power of Orders to offer sacrifice in the person of Christ, presides by this fact over the faithful people gathered here and now, presides over their prayer, proclaims to them the message of salvation, associates the people with himself in the offering of sacrifice through Christ in the Holy Spirit to God the Father, and gives his brothers and sisters the Bread of eternal life and partakes of it with them. Therefore, when he celebrates the Eucharist, he must serve God and the people with dignity and humility, and by his bearing and by the way he pronounces the divine words he must convey to the faithful the living presence of Christ” (93).

10.  “The lay Christian faithful called to give assistance at liturgical celebrations should be well instructed and must be those whose Christian life, morals and fidelity to the Church’s Magisterium recommend them. It is fitting that such a one should have received a liturgical formation in accordance with his or her age, condition, state of life, and religious culture. No one should be selected whose designation could cause consternation for the faithful” (Redemptionis Sacramentum, 46). 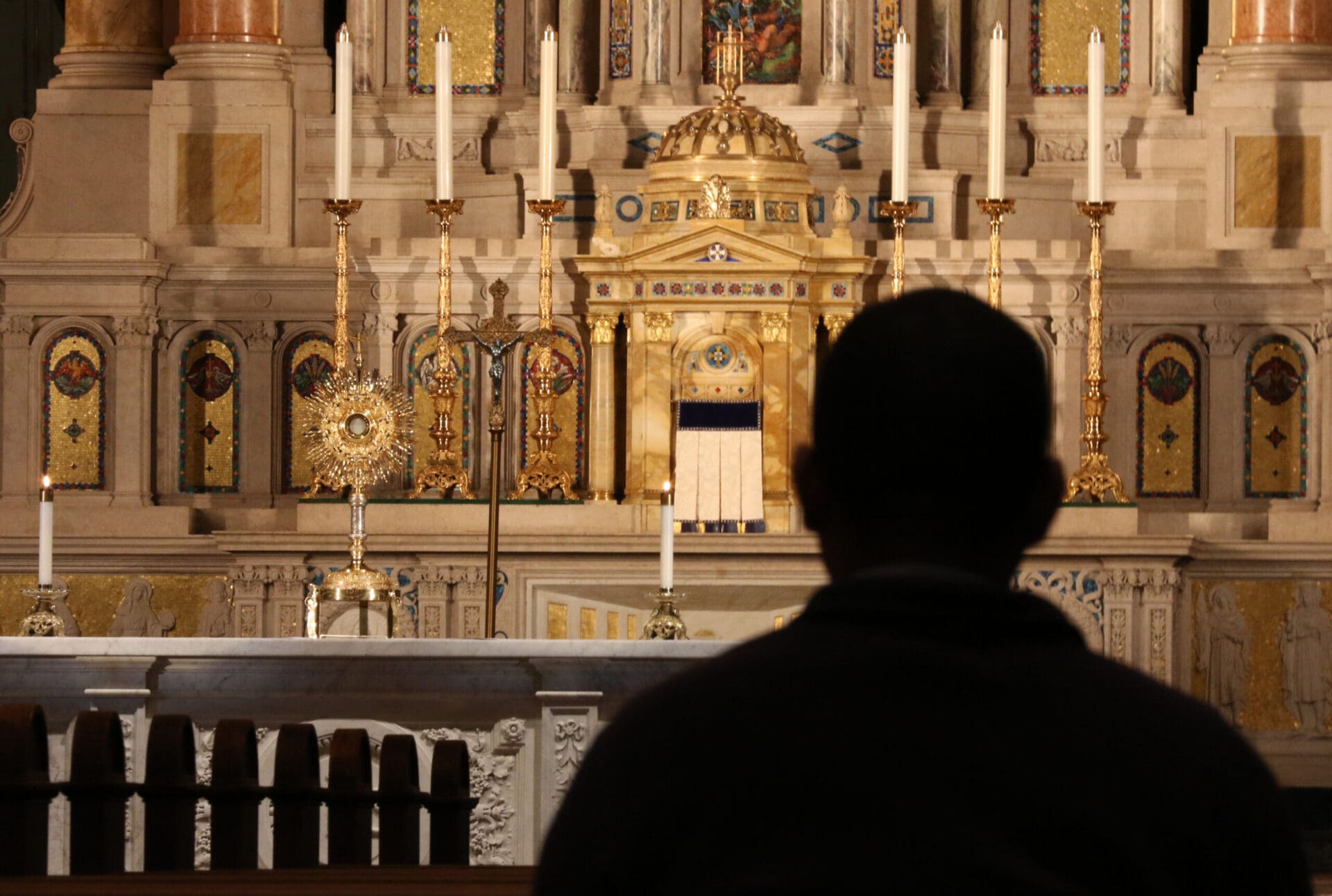