I am happy to meet all of you who have gathered in Rome from various countries to participate in the Conference on “Music and Church: Cult and Culture, 50 years after Musicam Sacram,” organized by the Pontifical Council for Culture and by the Congregation for Catholic Education, in collaboration with the Pontifical Institute of Sacred Music and the Pontifical Liturgical Institute of the Athenaeum Sant’Anselmo. I cordially greet you, beginning with Cardinal Gianfranco Ravasi, whom I thank for his introduction. I hope that the encounter and dialogue experienced in the last few days, in a shared reflection on sacred music and particularly on its cultural and artistic aspects, will bear fruitful results for ecclesial communities.

Half a century after the instruction Musicam Sacram, the Conference has wished to deepen the current relationship between sacred music and contemporary culture, and between the musical repertoire adopted and used by the Christian community and prevailing musical trends, from an interdisciplinary and ecumenical perspective. The importance of the aesthetic and musical formation both of clergy and religious was highlighted, and of the lay people involved in pastoral life and, more directly, in the scholae cantorum.

The first document issued by the Second Vatican Council was precisely the Constitution on the Sacred Liturgy, Sacrosanctum Concilium. The Council Fathers perceived the difficulties the faithful felt in participating in a liturgy whose language, words and signs they could not fully understand. In order to put into effect the fundamental guidelines outlined by the Constitution, Instructions were issued, among them, that on sacred music. From then on, although no new magisterial documents on the topic have been issued, there have been several significant pontifical interventions which have guided reflection and pastoral commitment.

The premise of the above mentioned Instruction is still highly relevant. “Liturgical worship is given a more noble form when it is celebrated in song, with the ministers of each degree fulfilling their ministry and the people participating in it. Indeed, through this form, prayer is expressed in a more attractive way, the mystery of the liturgy, with its hierarchical and community nature, is more openly shown, the unity of hearts is more profoundly achieved by the union of voices, minds are more easily raised to heavenly things by the beauty of the sacred rites, and the whole celebration more clearly prefigures that heavenly liturgy which is enacted in the holy city of Jerusalem” (Musicam Sacram, n.5).

Several times, following Council recommendations, the Document highlights the importance of the participation of the entire assembly of faithful defined as “active, conscious, full.” And it very clearly highlights that “the true solemnity of liturgical worship depends less on a more ornate form of singing and a more magnificent ceremonial than on its worthy and religious celebration” (n.11). It is therefore firstly a matter of intense participation in the Mystery of God, in the “theophany” that occurs in each Eucharistic celebration, in which the Lord manifests himself in the midst of his people, called to participate in a true way in the salvation enacted by Christ’s death and Resurrection. Active and conscious participation consists, therefore, in knowing how to enter profoundly into this mystery, in knowing how to contemplate, adore and welcome it, in grasping its sense, thanks in particular to religious silence and to the “musicality of the language with which the Lord speaks to us” (cf. Homily at Santa Marta,12 December 2013). It is precisely in this perspective that reflection on the renewal of sacred music and its precious contribution moves.

In this regard, a two-fold mission emerges which the Church is called to follow, especially through those who in various ways work in this area. On the one hand it calls for safeguarding and enhancing the rich and manifold patrimony inherited from the past, balancing it with the present and avoiding the risk of a nostalgic or “archaeological” outlook. On the other hand, it is necessary to ensure that sacred music and liturgical chant be fully “inculturated” in the artistic and musical language of the current time; namely, that they are able to incarnate and translate the Word of God into song, sound and harmony capable of making the hearts of our contemporaries resonate, also creating an appropriate emotional climate which disposes people to faith and stirs openness and full participation in the mystery being celebrated.

Certainly the meeting with modernity and the introduction of speech in the Liturgy has given rise to many issues: of language, form and musical genre. At times a certain mediocrity, superficiality and banality have prevailed, to the detriment of the beauty and intensity of liturgical celebrations. For this reason, the various key figures in this sphere, musicians, composers, conductors and choristers of the scholae cantorum, with liturgical coordinators, can make a precious contribution to the renewal, especially in qualitative terms, of sacred music and of liturgical chant. In order to foster this development, an appropriate musical formation must be promoted, even of those who are preparing to become priests, in a dialogue with the musical trends of our time, with the inclusion of different cultural areas and with an ecumenical approach.

Dear brothers and sisters, I thank you again for your commitment to sacred music. May the Virgin Mary, who in the Magnificat sang of the holy mercy of God, accompany you. I encourage you not to lose sight of this important objective: to help the People of God to perceive and participate, with all the senses, physical and spiritual, in God’s mystery. Sacred music and liturgical chant have the task of giving us a sense of the glory of God, of his beauty, of his holiness which wraps us in a “luminous cloud.”

I ask you, please, to pray for me. I impart to you my heartfelt Apostolic Blessing. 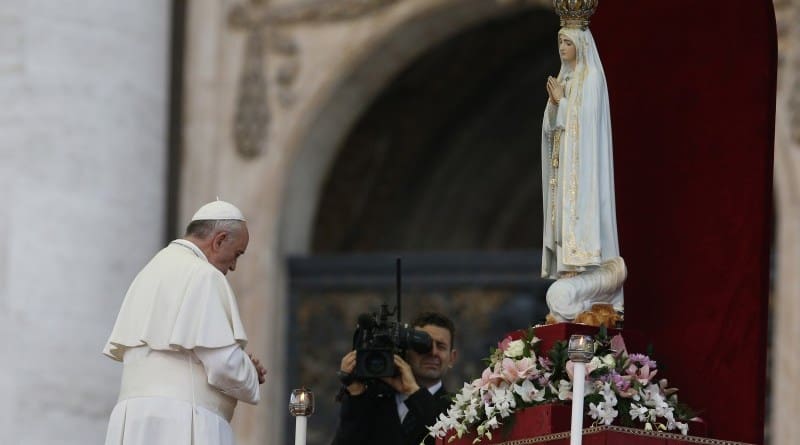