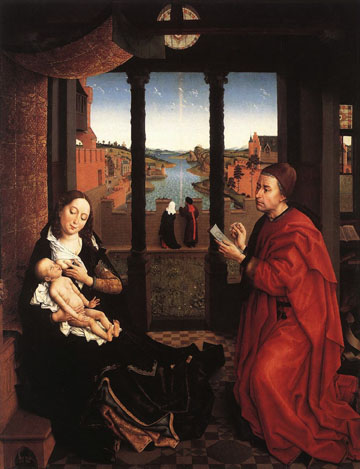 Saint Luke the Evangelist was born in Antioch and died ca 70 AD. A physician and follower of Saint Paul, Luke was the author of the Acts of the Apostles as well as the Gospel that bears his name. According to tradition, he was also an artist who painted a portrait of the Virgin Mary. Saint Luke’s account of the life of the Virgin in connection with the Infant Jesus is much more detailed than in the other Gospels, which may have fostered this legend. Several famous images of the Blessed Virgin with the infant Jesus have been attributed to Luke — including the revered “Black Madonna” of Czestochowa, and the Salus Populi Romani icon, now in Santa Maria Maggiore (the image that was carried in procession and venerated during the recent prayer session for peace that Pope Francis held at St. Peter’s) — though both paintings date from a later period.

Saint Luke, whose feast day is October 18, is patron of both physicians and artists, and he is often represented in art in the act of painting the Virgin and Child — for example the painting on the cover of this issue, commonly known as the “Saint Luke Madonna,” by the highly influential 15th-century Flemish artist Rogier van der Weyden.

The “Saint Luke Madonna,” painted in oil on an oak panel and dated around 1435-40, is one of several almost identical versions by this artist. They were probably originally used as altarpieces in painters’ guilds or other chapels dedicated to Saint Luke in various Flemish cities. The painting illustrated here is in the Alte Pinakothek in Munich. Other versions of the “Saint Luke Madonna” are in the Museum of Fine Arts in Boston, the Hermitage in St. Petersburg, and in the Groeningemuseum in Bruges.

Rogier van der Weyden was born Rogier de le Pasture in Tournai in 1400. He became an apprentice in the workshop of Robert Campin in 1427, and became an independent master of the guild of painters in 1432.  Another inspiration for his work was Jan van Eyck, the famous artist from Bruges. In 1435, Rogier moved to Brussels, translated his French name into Flemish — van der Weyden — and he established a studio.

In 1450, he went to Rome for the Jubilee year, and remained there for several years. He tutored Italian artists on the use of oil paints (which the Flemish had originated), and received commissions from several prominent Italian families, such as the Medici in Florence. He was also influenced by Fra Angelico’s work.

After his return to Brussels, Rogier’s international reputation grew. He strongly influenced the next generation of Flemish artists: Petrus Christus, Dieric Bouts, Hugo van der Goes, and Hans Memling. His art was also a vehicle for transporting the Flemish style throughout Europe, and during the second half of the 15th century his influence dominated painting in France, Germany, and Spain. He died in Brussels in 1464.