What Color is Lent? Why Genuflect?

A young Catholic told us recently he would be more interested in the Liturgy if he knew more about it.

“For example,” he said, “why are the vestments the colors they are for a given time, or why genuflect? I get a greater sense of satisfaction and depth from something I do from an understanding of why it is done than from simply playing monkey see monkey do.”

Perhaps in the past Catholic kids learned in grammar school the very interesting if rather complex symbolism of worship practices. Altar boys would have been taught these things by a priest.

If the explanation of symbols used in Catholic worship has not been taught to the younger generation—i.e., any “cradle Catholic” under 40 or any convert of the past two or three decades—this may account for the apparent lack of enthusiasm for Catholic worship. In our experience, even very young children are greatly interested in these signs of our faith, and respond enthusiastically when they are given the explanation for these symbols.

What Do the Seasonal Colors Mean?

Green vestments are worn during Ordinary Time, which is the largest segment of the liturgical calendar including most of the summer. Green signifies new growth, the flourishing of the “vineyard.”

White is a symbol of purity, light, rejoicing, and of the Resurrection, and is used on all special feasts of Our Lord, Christmas and Easter season, Corpus Christi, and at festive occasions such as weddings and baptisms.

Since Vatican II, white vestments are also usually used at funerals, suggestive of the Resurrection; however black vestments may still be used. Interestingly, white signifies mourning in the religions of the Far East, but not in the West.

For Marian feasts and solemnities, some parishes have special white vestments ornamented with blue, symbolizing Mary’s fidelity. Blue is not a liturgical color, however, and is not to be used as the main vestment color.

Cloth-of-gold, often richly embroidered, may sometimes replace white, especially for very festive feasts, such as Christmas and Easter, or for weddings.

Red vestments are worn on the feasts of martyrs and on Pentecost, Passion Sunday, and feasts of the apostles. The color symbolizes martyr’s blood—also fire, for Pentecost. Usually red is used now on Good Friday, instead of the traditional black.

Purple, preferably a somber, dark shade, is worn during the penitential seasons of Advent and Lent. Purple signifies great solemnity, with connotations of both penance and royal dignity. Decoration of the vestments for these penitential season is appropriately simple.

Black, signifying mourning and absence of light, is properly used on All Souls Day and is still appropriate and permissible for Good Friday and for funerals, although seldom used now.

Rose colored vestments may be worn on the third Sunday of Advent and the fourth Sunday of Lent, to suggest a pause or lift in the penitential focus of these seasons, appropriate because of the initial Latin words of the collects for these Sundays, which mention rejoicing.

This same symbolism is seen in the Advent wreath: three purple candles and one rose. The rose candle is lit on Gaudete Sunday, the third Sunday in Advent, when the rose-colored vestments are used.

Liturgical vestments, including the chasuble and stole worn by the priest or other fabric appointments used for Mass (e.g., chalice veils, pulpit falls or banners), should ordinarily match in order to reinforce the symbolism.

These appointments may also be white, especially when a parish has only one set of vestments. They may be ornamented with other colors in embroidered or appliquéd decorations, especially gold; and the style of this ornament may vary widely from very elaborate and classical to very austere or modernistic. But the main fabric of all the liturgical vestments is always to be of the prescribed liturgical colors.

The “liturgical denominations,” Anglicans and Lutherans, generally use the same symbolic color system for vestments and/or altar appointments as the Catholic Church does. There is also a growing use of the traditional liturgical colors among some of the “low-church” Protestant denominations.

Paradoxically, just as liturgical symbols seem to be losing meaning for many Catholics, Protestants seem to pick them up and value them.

When Do We Genuflect?

Genuflecting (literally, knee-bending) is a gesture of honor to Jesus and to His Real Presence in the Blessed Sacrament reserved within the tabernacle in all Catholic churches. A candle lamp hangs near this tabernacle to signify Christ’s Presence.

With the exception of genuflecting to the cross on Good Friday, one does not genuflect on Good Friday when the tabernacle is empty. The door stands open, the candle lamp is extinguished. The reason for this is obvious, when you think about it. When the reserved Sacrament is removed from the tabernacle, Christ is no longer present within it. (One does not genuflect when re-entering the pew immediately after receiving Holy Communion, either, because the Body of Christ is now actually contained within the person who has just received Him.)

There are many biblical references, both Old and New Testament, to the traditional gestures of honor and worship of bending the knee and bowing the head.

Psalm 95 says “Let us kneel before the Lord, Our Maker.” Jesus knelt to pray. Saint Paul’s Letter to the Philippians (2:10, 11) says “…at the name of Jesus, every knee should bow, in heaven and on earth and under the earth, and every tongue confess that Jesus Christ is Lord, to the glory of God the Father.”

Traditionally, Catholics bowed their heads whenever the name of Jesus was spoken, and genuflected at the Incarnatus (“… and was made man”) during the Creed. Some still do. It is still appropriate. Current missalettes contain the rubric (instruction) that people are to bow at this moment during the recitation of the Creed.

These are only a few of the symbols that give many layers of richness and meaning to the Catholic worship ceremonial. Maybe we should not take for granted that all Catholics know these things as if by osmosis, and be sure to pass them along to our children and godchildren—and to new Catholics. 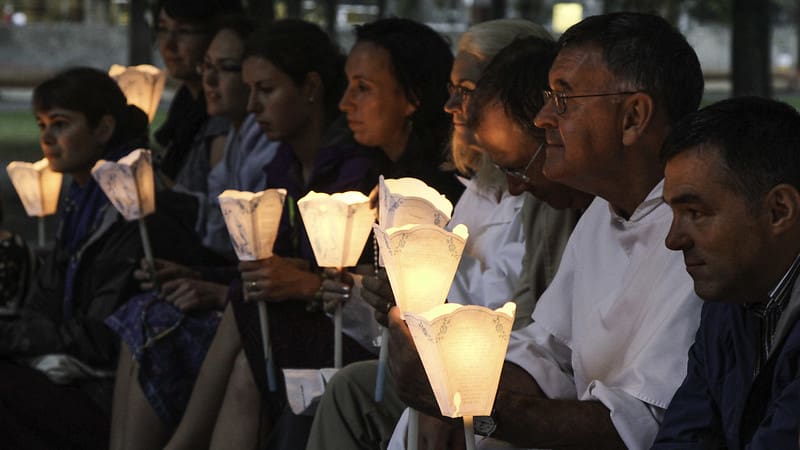