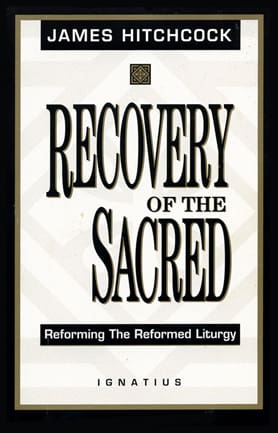 The Recovery of the Sacred Forward to the online edition

The Recovery of the Sacred by historian James Hitchcock, professor of history at St. Louis University, was originally published in 1974, a decade after the Second Vatican Council. The book provided an extraordinarily incisive analysis of post-conciliar liturgical developments that had impeded the authentic reform that the Council — and the pre-1965 “Liturgical Movement” — had intended.

Twenty years later, The Recovery of the Sacred’s constructive critique was not only still timely, but arguably more urgent, as new scriptural and liturgical translations were then in progress, and their integrity was endangered by the same erroneous views that had prevailed in the intervening years. Thus the book was published again in 1994.

Dr. Hitchcock’s analysis of the unexpected and rapid desacralization of the Liturgy in the years following the Second Vatican Council under the influence of a new class of professional liturgists remains an insightful guide.  Chapters of the book have appeared in Adoremus Bulletin.

Now, in 2011, the Church is about to receive, for the first time, an authentic English translation of the sacred text of the Roman Missal.  Its reception and implementation is crucial to the “recovery of the sacred” in Catholic worship. After four decades — two generations — it will not be easy to overcome errors and abuses that have become deeply entrenched in the minds of many Catholics, clergy and laity alike.  This has affected not only translation, but nearly every aspect of Catholic worship — from art and architecture to music and popular devotions. As Father George Rutler wrote about the second publication of Recovery of the Sacred, “what was prophecy when it was first published, now is sober reflection. There is hope here for surviving the most tragic self-mutilation of Catholic culture since the Arian crisis of the fourth century”.

Signs of authentic renewal of the Church’s liturgy, however, are no longer rare, as they were in the 1990s.

Though his book is again out of print, Dr. Hitchcock’s often prescient insights concerning the necessary recovery of the sacred in Catholic liturgy are as compelling today as when they were first written — and perhaps even more concretely useful. Thus, with the author’s kind permission, we are pleased to present a complete online edition of The Recovery of the Sacred.

Preface to the First Edition – 1974 Edition

Chapter 1 – The Liturgical Revolution — Published in the Adoremus Bulletin, November 2009

Chapter 2 – The Chimera of Relevance

Chapter 3 – The Cult of Spontaneity

Chapter 4 – The Loss of History — Published in the Adoremus Bulletin, June 2006

Chapter 5 – The Death of Community

Chapter 7 – The Reformed Liturgy — Published in the Adoremus Bulletin, April 1996

Chapter 8 – The Recovery of the Sacred — Published in The Adoremus Bulletin, April 2011