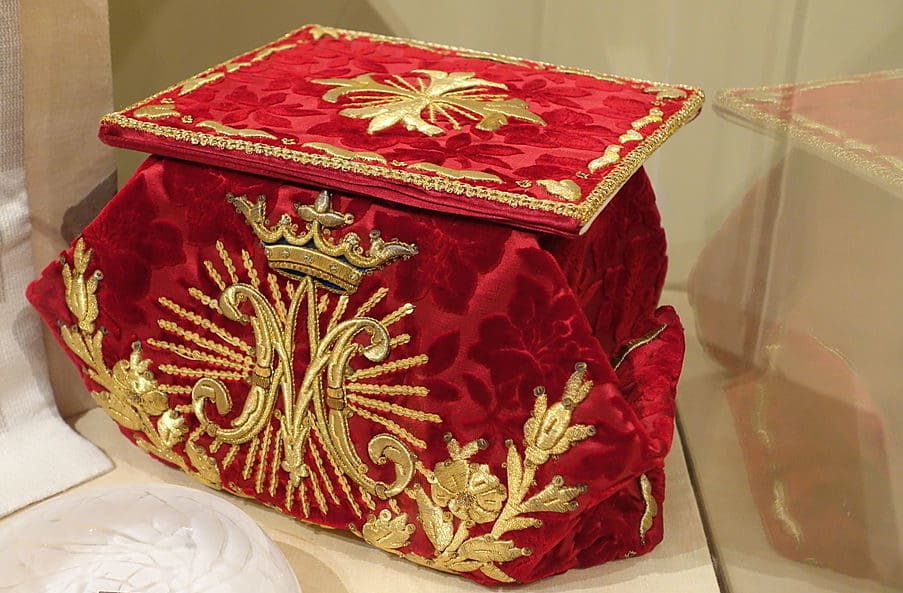 The Veil, the Chalice and the Dignity of Man – Like the Sacred Vessels at Mass, We Were Made to Receive Christ

According to the liturgical legislation of the Church, the chalice used at Mass should be covered with a veil. The General Instruction for the Roman Missal [GIRM 118] states, “It is a praiseworthy practice for the chalice to be covered with a veil, which may be either of the color of the day or white” (see also, Ceremonial of Bishops, no. 125a).  Like most liturgical vestments, the chalice veil is a mysterious garment. We may be tempted to dismiss it as a kind of decoration. But the chalice and the veil not only have a function during the celebration of Mass, they also remind us of a dignity that is too often veiled.

A veil is used to cover the chalice when it is carried to and from the altar during the celebration of Mass. It is usually the same color as the vestments. As a liturgical vestment, it was probably introduced in the Middle Ages, and may have had a functional origin-perhaps developed from a sacculum or small bag for carrying the sacred vessels.

The veil still has a function. For example, the veil is useful sign to parishioners accustomed to reciting the entrance and Communion antiphons during weekday Masses which vary according to the feast. The priest is often given the choice of celebrating a memorial in honor of a martyr. When he uses a red chalice veil, this indicates even before Mass begins that he has chosen that optional memorial.

The veiled chalice can also highlight both the relationship and the distinction between the two main parts of the Mass, the Liturgy of the Word and the Liturgy of the Eucharist. Just as the Gospel book which contains God’s Word is adorned and dignified with beautiful covers, so the vessels that will contain the Body and Blood of the Lord should be adorned and dignified with the veil. Also, since the chalice is the visible sign of the Eucharist, it seems appropriate that it should be veiled during the first part of the Mass, the Liturgy of the Word.

The source of a deeper symbolic meaning of the chalice veil is found in the Scriptures. As prescribed in Exodus and described in Hebrews, a veil or curtain separated the Holy of Holies from the rest of the Temple:

For a tent was prepared, the outer one, in which were the lampstand and the table and the bread of the Presence; it is called the Holy Place. Behind the second curtain stood a tent called the Holy of Holies, having the golden altar of incense and the ark of the covenant covered on all sides with gold, which contained a golden urn holding the manna, and Aaron’s rod that budded, and the tables of the covenant (Hebrews 9:2-4).

The chalice veil reminds us of the curtain setting apart the Holy of Holies, and prompts us to approach the altar aware of our unworthiness to enter into union with God.

The removal of the chalice veil is one of the first liturgical actions at the Offertory in preparation for the reception of the gifts of bread and wine from the congregation. The removal of the veil following the Liturgy of the Word signifies that the sacred mysteries are about to be revealed. Again, this action is a symbolic echo of the Scripture:

And Jesus cried again with a loud voice and yielded up his spirit. And behold, the curtain of the temple was torn in two, from top to bottom; and the earth shook, and the rocks were split; the tombs also were opened, and many bodies of the saints who had fallen asleep were raised (Matthew 27:50-51).

The torn curtain at the death of Jesus signifies the transition from the Old Covenant to the consummation of the New Covenant promised by Jesus at the Last Supper: “And likewise He took the cup after supper, saying, ‘This cup which is poured out for you is the new covenant in my blood” (Luke 22:20). The removal of the chalice veil signifies the transition from the Liturgy of the Word to the Liturgy of the Eucharist, the “heavenly liturgy”.

Despite the barrier of our unworthiness, the unveiling of the chalice invites us to enter into the celebration of the sacred mysteries. When the veil is removed, the splendor of the chalice is exposed.

Liturgical legislation requires that the chalice “be made from materials that are solid and that in the particular region are regarded as noble. The conference of bishops will be the judge in this matter. But preference is to be given to materials that do not break easily or become unusable” (girm, 290). Chalices “are to have a cup of nonabsorbent material. The base may be of any other solid and worthy material” (girm, 291).

Once a chalice is used for the celebration of Mass, it should not be profaned by use outside Mass. The chalice is a sacred vessel. It has been set apart for holy things. (It is unsettling to see liturgical goods catalogs advertise ceramic “nuptial cups” to be used at wedding Masses and then given to the couples as souvenirs after the ceremony.) A chalice is consecrated for service at the altar because it has become a sacred vessel destined to hold the precious Blood of Jesus Christ.

The chalice I use was manufactured in the nineteenth century. It is solid sterling silver with a gold-lined cup. It was found in a second-hand jewelry shop. The chalice was rescued and refurbished. Restored as a sacred vessel, blessed by my bishop, it has at last returned to service at the altar.

A chalice normally should be noble and beautiful because, in itself, it expresses our worship and esteem for the Real Presence. (Exceptions to the rule can be quite touching as, for example, the stories one hears about priests secretly celebrating Mass in Nazi prison camps.)

The chalice is also a sign of our dignity as we stand before God. When Jesus Christ became man, he assumed human nature. He took on our humanity. He has consecrated human nature when He became man. Man has become “a sacred vessel” through Mary when, in the name of mankind, she conceived by the power of the Holy Spirit. One might imagine Jesus, just as any mother’s son, having many of the same physical features of Mary!

When we gaze upon the chalice at Mass, we might be reminded of what we have become -and what we can become-because of the Incarnation. The divine nature and human nature has become inseparable in the Person of Jesus Christ. The Incarnation in and of itself reveals the dignity of the human family. So St. Augustine can make this startling assertion: “God became man so that man might become God.”

He did not mean that individual human beings become “gods”. There is only one God. But our faith teaches us that we “become God” by being incorporated into the Mystical Body of Christ by Baptism. By Baptism we “become God”-without losing our distinct identity as servants and handmaidens of the Father-by our union with Christ in His Mystical Body.

The Incarnation also reveals that Jesus, born of Mary, is the “only-begotten Son of God.” There is only one Son begotten of the Father. But in Baptism, we become “sons in the Son”, adopted sons and daughters of God. However, in some sense we became “sons in the Son” even before Baptism because humanity has been consecrated by the fact of the Incarnation: “The Word was made flesh and dwelt among us” (Jn 1:14).

Our dignity-and the dignity of every human being from the moment of conception to natural death-can be found in this simple fact. By becoming man, God has transformed every man, woman and child into a sacred vessel that is capable of receiving Him.

Like a chalice consecrated for use at Mass, the Incarnation, followed by our incorporation into the Body of Christ by Baptism, sets us apart as a holy people. We no longer belong to a profane world, but to God. In the world but not of the world (Jn 17:16), we have been consecrated and belong to the Father through Christ. And like the sacred vessels at Mass, we are destined by divine decree to receive the body, blood, soul and divinity of Jesus Christ.

The chalice veil hence becomes a reminder that these mighty truths of our faith are often hidden from view.

The Church, of course, teaches that in the mystery of God’s providence, every human being is given enough grace for salvation. Still, God expects us to cooperate in unveiling the mysteries of our faith. Pope Paul VI echoes St. Paul when he writes that the question is not so much whether others will be saved if we do not unveil the mysteries of the Gospel, but whether we will be saved if we do not. “Woe to me if I do not preach the gospel!” [I Cor 9:16].

The unveiling of the chalice at Mass is a daily reminder of God’s magnificent gifts to us and our solemn obligation to reveal the splendor of man’s inestimable dignity as adopted sons of God in Christ.